Poverty is relative a measure. Because it is relative, it exists everywhere. That is why the yardstick for measuring poverty varies according to a given community’s level of economic development. Therefore, certain poor communities within rich countries would pass as rich communities in relatively poor countries.

In the UK, like any other developed country, the most impoverished communities live in the inner city areas. In UK’s second City, Birmingham, for example, Ladywood which was represented by Clare Short, the Minister for International Development under Tony Blair’s Labour government is one of the most impoverished parliamentary constituencies.

I listened to a BBC West Midlands talk-show on ‘Breadline Britain’ yesterday June 23 2012. The talk was in response to the Daily Mail newspaper’s report which suggested that about 7 million British (11% of the British population) are one bill away from economic disaster.

Daily Mail reported that spiralling cost of living and squeezed salaries are responsible for pushing working families to the brink:

Daily Mail also reported that childless couples with combined incomes of up to £29,000 were among those at risk of poverty. The UK’s average household wage is around £27,000 per annum. If families earning up to £29,000 (i.e. above the UK average) are struggling, then you can imagine how those earning much less than that amount (i.e. less than £15,000) make ends meet. Moreover, the stated earnings are gross – i.e. before taxation, national insurance contributions, mandatory direct collections like mortgages, council tax etc.

The Guardian newspaper’s ‘Breadline Britain Project’ is tracking the impact and consequences of recession on families and individuals across the UK. It is assessing how people are coping (or failing to cope) with austerity measures as the cost of living rises, incomes shrink, and public spending cuts start to bite. It is examining household expenditure items including food, housing, work, debt and money.

Charities are also reporting an increasing trend of food poverty. The Trussell Trust, says every single day it is handing out emergency food parcels to parents who are going without meals in order to feed their children, or even considering stealing food to put on the table, as the government’s austerity measures start to bite.

The impact of the economy is forcing tens of thousands of ordinary people to queue up for food. The number of people to whom it had issued emergency food parcels had doubled in the last 12 months to an extent that one food bank even ran out of food, and was set to increase further as rising living costs, shrinking incomes and welfare cuts take their toll.

Because of the recession many are people having to make stark choices between a nutritious meal and other basics in life. People are embarrassed to be asking for food but are nevertheless putting pride aside.

This could just be ‘jaribu’ – the worst might still be in the pipeline! 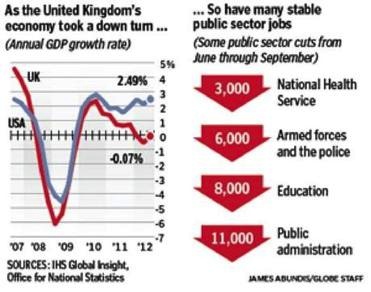