Why Uganda GMO Bill Should Wait. 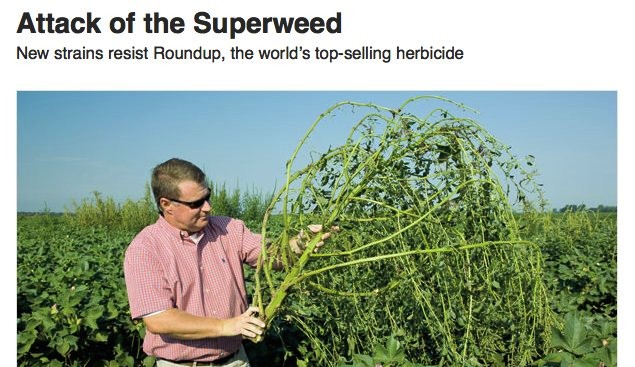 The Ugandan parliament is currently debating a bill to establish Biosafety Laws for GM Crops. However, as Uganda Parliament debates this bill, it should wait and investigate as to why new findings have revealed that the once advertised “New technology miracle in Agriculture and solution to low yield and weeds”, is becoming a big nightmare.

Dr. Vandana Shiva’s assertion that Seed patents ‘are a fraud’, is not new and is gaining attention across the globe.

Now, GMO Science’s credibility as a solution to more food and less herbicides use has been disputed. If your information about GMO technology benefits are of 2011 or early 2012, it is outdated and should be discarded.

“I got into this originally to try to keep the biotech industry honest,” Dr. Benbrook said. According to his peer-reviewed paper published recently in the journal Environmental Sciences Europe, it’s quite clear: Genetically-modified crops have led to a significant increase in the use of herbicides. “Things are getting worse, fast,” he said in an interview. Monsanto has declined to comment on the findings.

The  Research Professor for Sustaining Agriculture and Natural Resources Washington State University, Dr. Benbrook, published in his new paper (PDF) funded by the US Department of Agriculture:

1. The use of herbicides in the production of three genetically modified herbicide-tolerant crops — cotton, soybeans and corn — has actually increased. Weeds started to develop resistance to Roundup, pushing farmers to apply higher per–acre rates.

2. “More food” argument for using GMOs is not necessarily true.

Recent research findings of GE crops, especially “gene interaction” – using herbicide-tolerant and pesticide-expressing genes that negated the yield are contrary to what the GMOs Corporations have been telling farmers and what pro-GMO bill activists are telling Uganda Law makers and the nation.

Pesticide use ramping up as GMO crop technology backfires:

Farmers across USA are finding themselves faced with what they have termed “Super Weeds” and hard-to-kill insects, because the weeds are resistant to any conventional chemicals and have adapted resistance to regular doses of Monsanto’s Round up herbicide.

That is why now, after about 15 million acres of American crops have been affected with this “superweed”, GMO Corporations like Monsanto are so desperate that they are turning to a chemical that was once a component of the Vietnam war defoliant, Agent Orange. 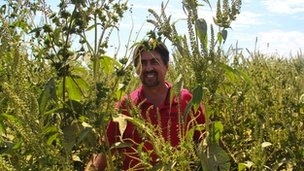 These giant ragweeds have grown tall despite the application of herbicide

It is so bad that the GMO Corporations had to sneak another bill through congress for Protection as the congress was busy debating to prevent $85B sequester spending cuts.

” Genetic engineering in agriculture has disappointed many people who once had hopes for it. Excluding, of course, those who’ve made money from it, appropriately represented in the public’s mind by Monsanto. That corporation, or at least its friends, recently managed to have an outrageous rider slipped into the 587-page funding bill Congress sent to President Obama.[1]

.
The rider essentially prohibits the Department of Agriculture from stopping production of any genetically engineered crop once it’s in the ground, even if there is evidence that it is harmful.

.
That’s a pre-emptive Congressional override of the judicial system, since it is the courts that are most likely to ask the U.S.D.A. to halt planting or harvest of a particular crop. President Obama signed the bill last week (he kind of had to, to prevent a government shutdown) without mentioning the offensive rider [2] (he might have), despite the gathering of more than 250,000 signatures protesting the rider by the organization Food”……

Summary of Major Findings and Definitions of Important Terms

Herbicide-tolerant and Bt-transgenic crops now dominant U.S. agriculture, accounting for about one in every two acres of harvested cropland, and around 95% of soybean and cotton acres, and over 85% of corn acres.

There are now two-dozen weeds resistant to glyphosate, the major herbicide used on HT crops, and many of these are spreading rapidly. Millions of acres are infested with more than one glyphosate-resistant weed. The presence of resistant weeds drives up herbicide use by 25% to 50%, and increases farmer-weed control costs by at least as much.

“Pesticide” is the term used by the U.S. EPA, and pest control experts and scientists, to describe any chemical sprayed or applied to control insects, weeds, plant disease, and rodents. “Pesticide” encompasses herbicides, insecticides, fungicides, rodenticides, and fumigants. “Pesticide use” on a given crop refers to the volume of pesticides applied during a production season, either per acre/hectare or across all acres/hectares planted to the crop. Pesticide use is typically measured as the sum of the pounds of herbicides, insecticides, fungicides, and other types of pesticides applied.

“Genetically-engineered (GE) crops” have been transformed to express a novel trait using the tools of molecular biology. The new traits in GE crops are derived from a foreign species that is not sexually compatible with the transformed crop (e.g., a bacterium, a fish, an animal, a tree).

“Herbicide-tolerant (HT) crops” are genetically engineered to withstand the application of specific herbicides over the top of the crop, killing or stunting weed growth, while leaving the crop unharmed.

“Herbicide-resistant weeds” have developed the capacity to withstand or overcome applications of herbicides that once killed or controlled the weed.

“Bt-transgenic (Bt) crops” refer to varieties of corn and cotton genetically engineered to biosynthesize in plant cells one or more protein endotoxins produced by subspecies of the bacterium Bacillus thuriengiensis.

One response to “Why Uganda GMO Bill Should Wait.”